For a long time, Business organizations were limited by speed of software development by their IT organizations. Even though IT was seen as an enabler, businesses felt that they couldn’t get their products and services rolled out fast enough to the customers. As IT embraced newer methodologies and IT architectures such as DevOps and MicroServices, businesses are feeling more confident about getting important features and services into hands of customers at a faster pace.

Because of these changes, the world of software testing is undergoing a massive transformation. Every single aspect – people, tools and technologies, methodologies, delivery models—is rapidly evolving. There is overwhelming amount of information floating around all of us. It can be very difficult to keep a track of all relevant, useful information and to separate fact-from-fiction, theory-from-real world experience. Some of the most common misconceptions are around role of a software tester and role of software testing in general. While it’s true that eventually for organizations that have fully transformed into DevOps/MicroServices world, role of software testing and software tester will be completely absorbed within other roles; most of the organizations will take several years to get there. And many organizations will decide to operate on a hybrid model – partly operating on newer methodologies, and partly continuing to maintain their legacy systems. For these organizations, it’s important to understand common misconceptions and industry realities for software testing for DevOps and MicroServices era.

Misconception #1: Testing is not required in MicroServices world

In DevOps & MicroServices world, it can be very difficult to keep a track of all relevant, useful information and to separate fact-from-fiction, theory-from-real world experience

•  SDETs / DevQEs are integral part of pods, actively participate in every development cycle from day-1

•  While SDETs / DevQEs have deep expertise on development technologies being used within a pod, their primary focus is to look for errors in products being developed and quality assurance process compliance within that pod

•  SDETs / DevQEs will also automate as many test scripts as they can, which enables CICD pipeline and rapid deployments

Misconception #3: Development and Testing is done by a single vendor (in organizations that rely on vendors / partners)

•  MicroServices /DevOps based pods work in ‘One Team’ model

•  While it’s true that if all roles within a pod are being delivered by a single vendor then they can benefit from colocation; this scenario is very rare in global delivery model anyways – more and more teams are embracing multi-location multi-vendor pod structures as long as time overlaps and communication-collaboration tools are put in place

Misconception #4: A MicroService is completely standalone and once it’s tested, one doesn’t have to worry about integration or end-to-end tests

•  Well, it’s not completely a misconception. For certain organization who are ‘Digital first and digital only’ (Think Google, Facebook, Wix ), this is indeed true. In these organizations, the IT architecture has been built from ground up to be a ‘services-oriented architecture’ and each of these services can be dealt with in isolation.

•  But majority organizations have not been fully transformed yet (or can never fully transform). For these organizations, MicroServices constantly have to interact with other interfaces within their IT application landscape that can be a mishmash of legacy systems, middleware, modern 3rd party applications, and ERP systems .

•  Hence, for these organizations, it becomes important to test at least a thin layer of cross-MicroServices business flows or interactions between MicroServices and other systems.

As IT organizations go through this transformation, it’s also important to address some fundamental question, such as:

Question 1: How will software testing roles within my IT organization change?

•  Traditionally, IT organizations have had ‘Functional Tester’ and ‘Test Automation Engineer’ as two primary roles. These roles will evolve into following 3 roles:

•  SDETs/DevQAs: Functional testers will evolve into SDETs/replaced by SDETs with ability to conduct functional testing and automation within pods. They will also support performance & security test activities within a pod.

•  Test Architect: Responsible for early engagement during the technical requirements and product backlog creation phase. Responsible for ATDD approach and making sure that the stories get developed in a proper testable sequence.

Question 2: How will the new IT organization structure may look like from Software testing perspective?

•  The pod structure will become a self-sufficient mini-org that can fulfill its own needs. The size of these pods will tend to follow the famous ‘2 pizza team’ rule – mostly between 6 to 8 people. Majority of these people will be dedicated to a pod. Some roles may cut across multiple pods such as ‘Test Architect’ or some specialty SME skills.

•  There will continue to be a thin layer dedicated to end-to-end tests and maintaining continuous regression & test automation platform. 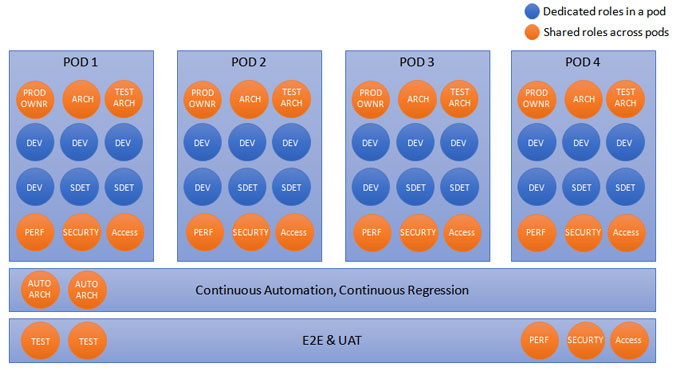 Question 3: Will there be a dramatic shift in testing tools?

Yes, absolutely yes. Major impact will be on test tools used for functional testing, with Performance & Security testing tools undergoing some minor adjustment (or updates to existing tools). The changes can be summarized as:

•  Development tools / languages will be reused for testing e.g. Python

This transformation journey is not to be taken lightly. It needs a lot of thinking, planning, execution rigor – and above all, a well thought through change management process.

Earlier this year within our own organization, Amdocs Testing became Amdocs Quality Engineering. This represents much more than a name change. It reflects our commitment to transform from a ‘reactive software testing’ to a ‘proactive quality engineering’ organization and keep our customers ahead of the curve. This journey is powered by our new award-winning 36ONE platform, that leverages advanced tools and technologies such as automation, artificial intelligence and machine learning.

And this wouldn’t have been possible without amazing collaboration we have had with our client IT organizations, with whom we are learning to walk this path hand-in-hand. The road is bumpy, full of unknowns and very demanding; but also full of excitement and immensely satisfying.

How Cloud and AI Are Driving Forward Customer Engagement and Service...

For a Smarter City: Trust the Data, Ignore the Hype

Your website is the face of your company and is the most important...